The Dalai Lama with Greta Thunberg and Leading Scientists: A Conversation on the Crisis of Climate Feedback Loops 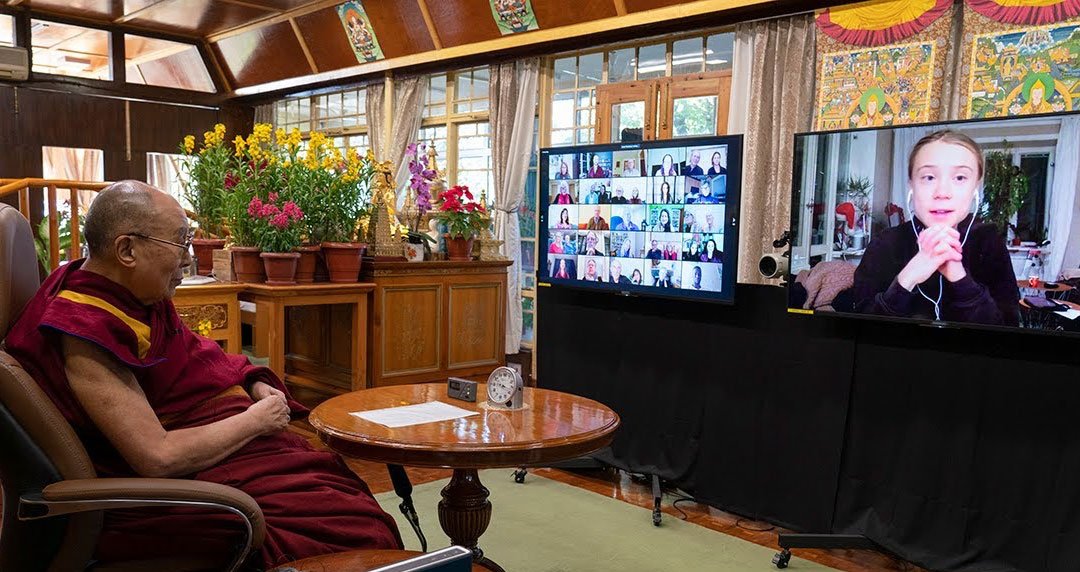 We launched our series of five short films about climate feedback loops with a discussion between the Dalai Lama and Greta Thunberg and climate scientists Susan Natali and William Moomaw. The event was moderated by Diana Chapman Walsh and sponsored by the Mind & Life Institute. Over a million viewers tuned into the conversation, where three clips from the films were shown.

The intergenerational meeting kicked off with the Dalai Lama and Greta Thunberg agreeing they share the goal of saving the planet. Susan Natali and William Moomaw offered their scientific perspectives on feedback loops and how we might halt, slow, and reverse them. All agreed that by educating people about what climate feedback loops are and how they work, we will better understand the dangers they pose.

The evening concluded with the Dalai Lama passing the torch to Greta and her generation of young climate activists, who give him hope for the planet. Greta later tweeted the link to the films to her 4.4 million followers highly recommending they watch them.

The National Museum of Natural History and the Environmental Film Festival in the Nation’s Capital invite you to watch the Introduction film from the Climate Emergency: Feedback Loops series and join us for a live Q&A discussion with Dr. Bill Moomaw (Professor Emeritus of International Environmental Policy at the Fletcher School, Tufts University) and Dr. Jennifer Francis (Senior Scientist at the Woodwell Climate Research Center; featured in the film), and Lake Liao from the Sunrise Movement. Moderated by Dr. Scott Wing (Research Geologist and Curator of Paleobotany at the National Museum of Natural History).

The event is free.

Register For The Event More Information

Sustainability, Peace and Social Justice: Pathways to Social Reform Meet the Needs of Adolescents’ Hope for the Future

Montessori’s vision of the unity of mankind addresses our responsibility for the global realities of 2021. Adolescents are particularly vulnerable and passionate about the state of our planet. This workshop includes clips from an extraordinary video production called Climate Emergency: Feedback Loops, a series of five short films featuring 12 world-renowned climate scientists. Narrated by Richard Gere, these films are available for viewing and subtitled in 20 languages. An interdisciplinary approach will be discussed to engage the mission of adolescents (12-18) putting Greta Thunberg center stage of what adolescents can reach out to do globally or locally.